A New York City neighborhood found in the Brooklyn borough, Flatbush was founded in 1651. The neighborhood was founded by Dutch colonists. Several subsections are found throughout Flatbush and the population is more than 110,000.

Originally, Flatbush was known as the Dutch Nieuw Nederland colony town called Midwout. This was back in 1651 and both the Midwood and the Midwout names were used throughout the Dutch era, along with Flatbush. During the same time, Midwood was settled to the south of Brooklyn College and was often called Flatbush.

Along with 5 other towns, Flatbush became a part of what was known as Kings County. It was all surrendered to the English in 1664. Flatbush was the county seat of Kings County and the center of life during the earlier years. The center of Flatbush was found as the modern-day intersection of Church Avenue and Flatbush Avenue. There's still an old Dutch Reformed Church here and Erasmus Hall, which is the oldest high school in New York City.

During the American Revolution, Flatbush was a key player with many battles fought nearby. David Mathews was one of the loyalist residents of Flatbush and a Mayor of New York City. He lived on the intersection of today's' Parkside Avenue and Flatbush Avenue.

After Flatbush was consolidated into the City of Greater New York in 1898, farming and Dutch merchants still had quite a bit of influence in the area. This move also made Flatbush a suburb of the city.

Before the City of Brooklyn was incorporated in 1894, Flatbush was defined as more than just the Town of Flatbush. It also included a large amount of land in central Kings County that extended all the way to Queens County and it also included the Village of Flatbush. The Marine Park and Flatlands neighborhoods still have some early Dutch structures.

Flatbush has a large population of Jews, Italian-Americans, and Irish-Americans in the first half of the 20th century. Just as it is today, it's a working-class neighborhood. Many residents in Flatbush followed the Brooklyn Dodgers as they were actually a team found in Flatbush, not just Brooklyn. Duke Snyder, the centerfielder for the Dodgers was called "the Duke of Flatbush'. However, the Dodgers left in 1958 and Ebbets Field was torn down. Today, where Ebbets Field was would actually be considered Crown Heights due to the neighborhood boundaries shifting.

The 1970s and early 1980s saw Flatbush shift in demographics from mostly Jewish, Irish and Italian to mostly Caribbean. In addition, some affluent areas started to pop up including Prospect Park South It became home to many doctors on Parkside Avenue.

A part of Flatbush is the southernmost area of Prospect Park.

The neighborhood goes all the way to the old Brooklyn City Line, which is just north of the Sothern edges of Prospect Park. This southern border is just about on the line of the Long Island Rails Road's Bay Bridge Branch. The eastern border of Flatbush is roughly at New York Avenue and the western border is Coney Island Avenue.

Ebbets Field used to be the home of the Brooklyn Dodgers and due to boundaries of the neighborhood shifting; it would have been a part of modern-day Crown Heights.

Originally, the Kings Theater was opened in 1929 and later closeted in 1977. It reopened in 2015 after renovations.

Our website features the best Flatbush real estate search for homes, condos, land and foreclosure properties available. It is the only site you will ever need! It is easy-to-use and updated by the official Realtor’s database every 15 minutes.

You can save searches, and get daily email alerts of new listings, price changes, sold data, and market reports. Our Interactive Map Search allows you to view properties on a map or refine your search by drawing the boundaries around the area you desire.

Considering selling or refinancing your home? Get an INSTANT property valuation now!

Contact us today to find out how we can be of assistance to you!

R5 zoning. 6 rooms over 6 rooms. House needs TLC. Can be sold as a package with 810 Ditmas ave. Please present all reasonable offers to broker. Show & sell!!!

R5 zoning. 6 room apt on the first and second floors. Needs TLC. can be sold as a package deal with 812 Ditmas ave. Please present all reasonable offers to broker. Show &...

Enter into this sunny and spacious unit in the Kings Village Building that has everything your family needs. 3 bedrooms, 1 full bath, 1 half bath, large Living Room, Form...

4 Family Townhouse Opportunity Knocks- This legal 4-family barrel-front townhouse is located on one of the "Greenest Blocks In Brooklyn" and has an active block associat...

One family home for sale in Flatbush. This home has a cozy living and dining room and a kitchen that leads to your backyard. There are 3 bedrooms, 2 bathrooms. Close...

Fully detached One family home in mint condition is available for sale. This gem is a one of a kind with lots of features too much to mention. Four Bedrooms two full bath...

Are you looking for a Charming Fixer-Upper? Are you looking to tear down and build anew in a rapidly developing neighborhood. Then look no further, this charming house is... 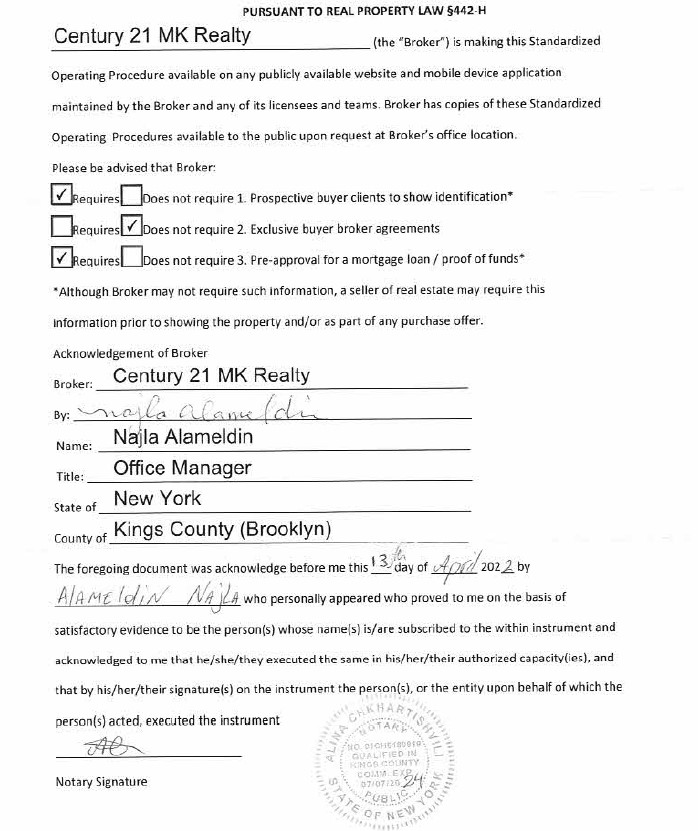 4226827
"Jack and his team did a great job in helping me rent commercial space. Their knowledge in the market, ability to execute within a short time frame and ... more "

5.0/5.0
by sevinj arif
4220763
"Jack was top notch on the deal. He is forthcoming, knowledgeable, hands on and truly cares about those he works with both on a business level as well ... more "